This shooting fell on the date leaving 44 days in the year:

The date had primary numerology of 67

187 is the homicide code in California, the state this shooting took place in:

The Mayor of Fresno is named Lee Brand

That news story from Sacramento on June 19th fell 1 year, 51 days after a different Sacramento policeman killed a man in his own back yard:

Last night’s shooting in Fresno was yet another clear numerical riddle in relation to the mayor of the city. This is something I have been decoding with frightening consistency this year. See these links for examples: (Link 1 – Link 2 – Link 3 – Link 4)

Mayor Lee R. Brand sums to 151 in the alphabetic order:

On the date of the shooting, and the resulting news coverage, he was 70 years, 227 days old:

It was 12 months, 27 days before the next total eclipse

The victims had gathered to watch a football game.

The word Pi is made up of the 16th and 9th letters.

Brand is Fresno’s 25th Mayor. The first three digits of Pi are 3.14

In April of 2017, just a few months after Lee Brand became mayor of Fresno, a man named Kori Ali Muhammad shot and killed four people during a shooting spree in that same city.

Kori Ali Muhammad also has gematria of 1078, which is found in the English value of Mayor Lee Brand, who was born on 4/5 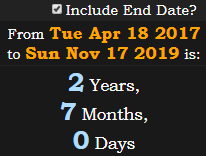 Muhammad’s shooting was 105 days into Brand’s term. The 2019 shooting made headlines during Brand’s 1050th day in office:

The circle is the 15th letter of the alphabet

Fresno, California also has overlap with mass shooting and Sunday, the day on which American football games are played.

The city of Fresno was a span of exactly 6997 weeks old on the date of the shooting: