So was the altercation between Mason Rudolph and Myles Garrett the result of two men’s emotions at their peaks during the heat of battle? Or was this a staged event, a la WWE, with its own “chair shot” to the head in the form of a helmet? 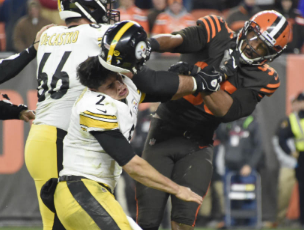 There were a total of 28 points in this game 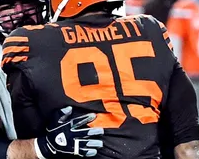 Mason Rudolph, who plays for Pittsburgh, wears #2. This is the same number worn by Mason Crosby of the Green Bay Packers, who have the masonic capital “G” in their logo.

The Browns began playing at FirstEnergy Stadium (aka Browns Stadium) upon their return to the NFL in 1999. This was the Browns’ 58th win in the stadium’s history.

The man who got suspended for the rest of the season, Myles Garrett, has matching gematria with the stadium’s name:

The Cleveland Browns were founded on 6/4 of ’44, meaning this game was 163 days after their anniversary:

The Browns currently have 105 losses at FirstEnergy Stadium. Recall how the Washington Nationals won the World Series with 105 wins this season.

It’s said that the 33rd degree of Masonry is the highest. Cleveland sums to 33 in Reduction:

#1 overall draft pick Myles Garrett was 3333 days before his 33rd birthday when he attacked Mason Rudolph, who has matching gematria with thirty-three

In the Reverse order, Cleveland sums to 165, just like Scottish Rite, the branch of Masonry running our federal government, mainstream media, and rigged sports leagues:

The compass on Freemasonry’s emblem is set to 47 degrees:

This game took place on the date leaving 47 days in the year:

Pittsburgh now has a 5-5 record.

Garrett was a span of 46 days before his birthday:

So we discussed how this was a clear riddle for Masonry. The United States is a nation literally built by Freemasons.

This football game began at 8:20 pm and lasted about three and a half hours, meaning the calendar turned to Friday the 15th right around the time the game ended. At that point, Mason Rudolph was in his 8,888th day since birth: