When browsing Fox News this morning, I came across this story:

I haven’t clicked on this story. Why would I care about some former baseball player’s divorce? 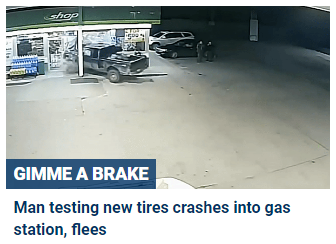 In this link, there’s a video of a drunken idiot barreling into a gas station. Nobody got hurt so it’s hilarious.

You know what else is funny? The driver of the truck has the last name Edmonds

Edmonds is not exactly an exotic name, but it’s not that common either. But not only do they have the same last name…

This is the exact same gematria as Jim Edmonds’ full name:

The truck crashed into an Ortonville BP

The Edmonds in this news story is from Groveland Township, MI

1212 is the Sumerian value of total solar eclipse

The story about Jim Edmonds was published yesterday, a date with 74 and 47 numerology:

It was 115 days after the most recent total solar eclipse:

The news story about their divorce is still in the headlines today, October 26th, written 26/10. Edmonds filed for divorce from King exactly 261 weeks after they got married:

Edmonds wore #15 during his baseball career. His divorce filing was 1 year, 50 days before the next total solar eclipse: