Over the past couple of weeks, I believe I have made a significant advancement in my understanding of gematria. Three major news stories from last week, all occurring on October 12th, all have remarkable similarities in how they were coded:

And now this story:

Just like I showed how the story from Fort Worth was aligned with its mayor, Betsy Price, the Hard Rock Hotel collapse was aligned similarly with its mayor, LaToya Cantrell. Rather alarmingly, this third story about the disappearance of Kamille McKinney can be broken down the same way.

This is especially interesting because of how the number 1331 relates to the eclipse code.

Kamille, who was the missing child, was kidnapped on October 12th, which was 63 days before Alabama’s date of admission, and thus 1 year, 63 days before the date of the next total eclipse:

It was a span of 3 months, 11 days after the most recent total solar eclipse:

Below, you will see how and why this is related to 666, the number of The Beast

The kidnapping was a span of 2 years, 53 days after the 2017 Great American eclipse:

CNN coded today’s headline with 670 in Ordinal, which is in all likelihood a tribute to the fact that Kamille McKinney shares 67 gematria in Reduction with Randall Woodfin 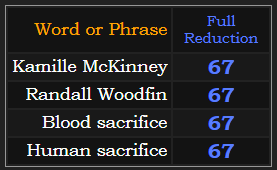 If you don’t include the number 3 in the headline, you get 667, which is very close to 666, or six hundred threescore and six

Why the 666 tribute? October 12th was the night before the Full Moon for Lunation 1197

On the date of the kidnapping and murder, Mayor of Birmingham Randall Woodfin had been in office for 1 year, 318 days:

Eclipses always occur 1, 5, or 6 lunar phases after the most recent one.