WWE’s SmackDown! returned to broadcast television on Friday for the first time in almost a decade. The huge event was headlined by a match featuring Brock Lesnar challenging Kofi Kingston for the WWE Championship.

Despite a dominant six-month run as champion, Kofi got completely squashed by Lesnar, losing to his finishing maneuver, an F5, in less than 9 seconds. Now obviously, pro wrestling is rigged – no clear-minded person believes otherwise. So not only do we know that this happened by the numbers, but we also know it wasn’t organic.

As it turns out, the white Lesnar’s WWE Championship victory over the black Kingston was yet another example of the eclipse crucifixion code playing out on the screen.

The match was a span of 3 months, 3 days after this year’s one and only total solar eclipse 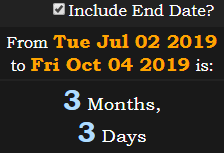 The date had 33 numerology:

It was 1 year, 71 days before the next total solar eclipse:

The date was October 4th, written 10/4. Kofi Kingston is from Ghana

The date had primary numerology of 53

Lesnar was 84 days after his birthday:

Think about how 84-year-old Diahann Carroll passed away the very same date. Both Carroll and Kingston are black, which is relevant because this happened on the 277th day of the year:

Wrestling journalists have suggested that Kingston was set up as a “sacrificial lamb” for Brock Lesnar to make Lesnar’s future match with Cain Velasquez more interesting. They couldn’t be more right.

Lesnar was 2 months, 22 days after his birthday.