The date of his death was 250 days after his birthday and also had 25 numerology:

Daniels won a grammy for the 1999 Destiny’s Child single Say My Name. He died exactly 9 months, 4 weeks after the anniversary of that song’s release date:

His full name has Jewish/Latin gematria of 1310

He died on a date with Standard numerology of 32

He died 3 months, 3 weeks, 3 days before his next birthday:

Daniels died on the 247th day of the year:

Daniels died a span of 227 days after the last total lunar eclipse.

His death fell 101 days before December 14th, the date of the next total solar eclipse in 2020:

If you measure to the actual date of the next total eclipse, we find a span of 66 weeks, 6 days: 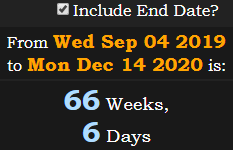 This post focused on how his death was a solar eclipse ritual. But watch when happens when you turn on full number calculation:

He died exactly 90 weeks before the next total lunar eclipse