In January of 2017, this Google Doodle was used to celebrate the Lunar New Year:

Seven days after the Doodle was posted, Bobby Simpson, truly one of the most “creatively observant” minds I’ve come across in the community, posted this video, picking up on how this was hinting at something for El Paso.

The first duration is the measurement between the Doodle and this past week’s El Paso shooting. The second measurement is from the date of Bobby’s video to the same event:

Bobby was able to pick up on the El Paso zipcode, 79998, being coded into the image through the number of firecrackers hanging from each letter in “Google”.

The shooting in El Paso, Texas was a span of 33 days after the 2019 total solar eclipse

Every 33 years, the 12-month lunar calendar falls almost exactly one year before 33 years on the 365-day solar calendar. Another word for Moon in Hebrew, Levanah, sums to 33

Bobby’s video fell exactly one week, or seven days, after the Google Doodle:

The 33rd verse of the Bible, Genesis 2:2, says God rested on the seventh day

The day after the El Paso shooting, we had the Dayton shooting. I led that post off talking about the 612 code and number permutations, so it’s interesting this Google Doodle came out 2 years, 6 months, 1 week before the shooting: 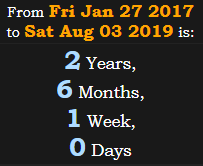