This has been a huge week in the news for billionaires. First, billionaire Chris Cline died in a helicopter crash on Independence Day. Then, billionaire Jeffrey Epstein was arrested on sex trafficking charges.

Yesterday, we got this news story about billionaire Bill Gates calling the late Steve Jobs, another former billionaire, a “wizard”. Today, July 9th, billionaire Tom Steyer announced his candidacy for U.S. President. This comes on the heels of news that another billionaire who ran for President in the ’90’s, Ross Perot, has passed away. 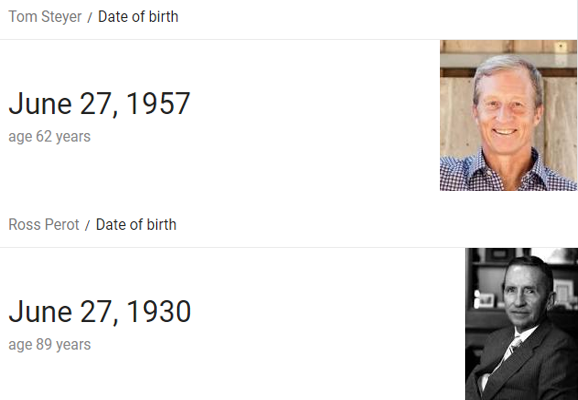 Not only were they both born on the 27th, but they were born exactly 27 years apart. This also points us to the ritual sacrifice code:

The 46th chapter of the Bible mentions a sacrifice. The name Ross Perot sums to 46

His Life Lesson number was 46

He died during his 4646th week since birth:

46 is the Hebrew value for both murder and kill

The date of Perot’s death also connects to the name of the business he made his billions from. Think about how July 9th is written as 7/9

This is also the gematria of their birthdays:

In Ordinal, death sums to 38, as well as a number of other related phrases:

Today is a span of exactly 75 weeks before the next total solar eclipse: 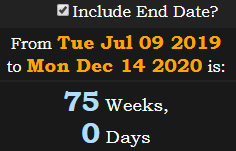 Today’s news represents a change in course for Tom Steyer. On January 9th, Steyer announced he would not be running for President. That date is written 1/09, matching Steyer’s Full birth numerology:

He declared his candidacy a span of exactly 26 weeks later, on a date with 26 numerology: 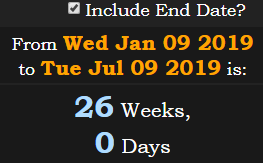 This same measurement is also a span of 182 days: