Yesterday, I pointed out that the story about the U.S. and Russian warships nearly colliding in the Pacific Ocean was a tribute to the age of Vladimir Putin, who turned 800 months old on the same date:

Eight hundred months sums to 85, the exact number of months Putin had been in office:

The US-Russia incident happened in the Pacific Ocean

So isn’t it interesting that on this same date, the brother of Hillary Clinton died?

As of today, the date she announced her brother’s death, she’s a span of 226 days after her birthday:

226 is the Extended value of the word sacrifice, which Hillary Clinton has some overlap with:

Notice the 73 in Reduction. Her husband Bill was 73 days before his birthday:

When Hillary made the announcement, she was exactly 3737 weeks old: 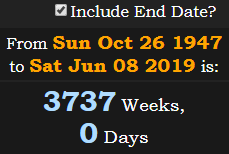 The death of Tony Rodham was very much related to this year’s total solar eclipse, as detailed in my original post. On the date of his death, Hillary was a span of 142 days before her birthday: