Let’s begin with the gematria of the headline, which sums to 2207 in the Primes cipher:

Notice how the article was last updated at 3:10

The word college sums to 31

1331 is one of the most significant numbers in this study, as it represents a solar eclipse.

Let’s measure to the most recent and next total solar eclipses from today’s date, which can be written 12/3 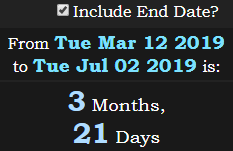 The women are being charged with conspiracy

The two women’s names also sum to 187 when combined:

He founded a clothing company named Mossimo in 1986, which is 33 years ago. Mossimo also has the 13-31 connection:

Giannulli is 281 days after his birthday, matching the Reverse value of the name of the criminal investigation:

The “Stars” Are Arrested

Today has Full numerology of 54

Of course, a solar eclipse is when the Moon covers up the Sun

The Sun is said to be 93 million miles away. Felicity Huffman is 93 days after her birthday:

Saturn falls into direct opposition with the Sun every 54 weeks.

With the number of people involved, this post could go on forever, so I’m trying to focus on the most basic aspects. But here are a few other things worth mentioning.

Everyone was essentially hit with the same charge:

How about another look at the headline?

As for the 1313…no real explanation necessary.

My Dad Retires by the Numbers
The JonBenét Ramsey Hoax