227 is connected to the circle

Whether you write the year as two thousand nineteen or twenty nineteen, it doesn’t matter. This year, it’s the only date to have 314 gematria in either Ordinal or Reverse.

This year, April 9th will have a Life Lesson number of 25…

…and Full numerology of 52

We know how 1331 is the ultimate solar eclipse number.

April 9th will be 19 months, 19 days after the most recent total solar eclipse:

It’s also exactly 33 weeks after the first anniversary of that same eclipse.

Measuring to the next total solar eclipse, we find it’s 2 months, 23 days:

There are 223 months in the Saros eclipse cycle.

April 9th is also a span of 2 years, 2 months, 3 weeks after Trump, who was born on the same date as a lunar eclipse, took office: 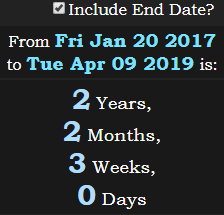 Donald, America, and Circle all sum to 50 in the alphabetic order:

Everyone seems to be predicting some sort of disaster for August 11th. That’s the 223rd day of the year. I’m not predicting anything in particular for either date, but I’m thinking when those dates do arrive, I’ll be able to point to this post to explain what happened.

There’s one more significant total solar eclipse coming up – that’s the one in 2024, and it occurs on the 99th day of a leap year, much like how April 9th is the 99th day in non-leap years. If we measure to that eclipse, we get another interesting number, considering how it’s being called the second Great American eclipse. 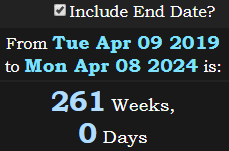