See my original post made the day after Reigns announced his illness. In that post, I said it was a “work” – wrestling terminology indicating it’s part of the show, and not real.

Since then, there’s been no real evidence I’ve seen that he’s really sick. In fact, he was recently filming fight scenes for a future movie with The Rock. The industry has received extremely limited updates on his health, and now, just four months later, he’s already announcing his return.

Roman Reigns’ return will be exactly 18 weeks after he vacated his Universal Championship:

R is the 18th letter, and his initials sum to 18 in the other three base ciphers:

When he returns, it will be exactly 1 year, 27 weeks after the eclipse: 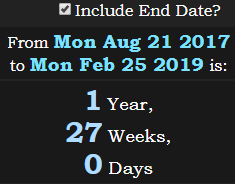 127 is the Ordinal gematria of Metonic cycle

Reigns’ return falls on February 25th, written 2/25
The Metonic cycle is credited to the astronomer Meton

When you write out One hundred twenty-seven, it sums to the same as Leukemia, which is also the same as total solar eclipse in Hebrew.

Still measuring from the eclipse to his return, we also find this is 79 weeks, matching his real full name:

Adding his nickname to his real name gives multiple connections to solar eclipse in the two most significant ciphers:

The date of his return will have identical numerology to the date of the 2017 Total Eclipse: