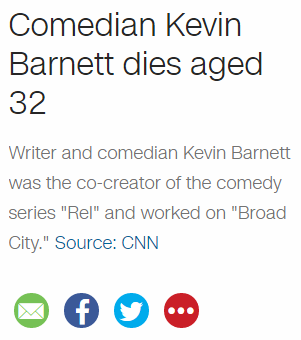 Kevin Barnett has 120 / 39 birth numerology, lining up with the Reverse values of eclipse

His name also syncs up with eclipse in Jewish gematria:

Barnett’s last full day alive was exactly 74 weeks after the most recent total solar ecipse, the Great American one of 2017:

In the Gospels, Jesus is said to have been crucified under an event commonly perceived to be a solar eclipse. Kevin matches Jesus in Ordinal and Reverse, including the number 74

He died exactly 5 months, 15 days after his birthday:

August 7th is the date that leaves 146 days in the year:

Barnett is also known for his work on Broad City

Barnett died a span of 169 days after his August seventh birthday:

Barnett was the co-creator of a television show called Rel. The main main character is played by Lil Rel Howery.

Kevin Barnett died at the age of thirty-two years old on January twenty-second, the 22nd day of the year.

Lil Rel Howery has a Life Lesson number of 55

In the Reverse order, Tijuana, Mexico sums to 206

See why 33 is a number of sacrifice.

The show Rel has matching gematria with the numerology of the date on which Barnett passed away.

The main character is played by, who was born on the 17th of December.

Rel made its television debut on September 9th, which was exactly 135 days before Barnett died of pancreatitis