As I say all the time, the Scottish Rite of Masonry, a subsidiary of the Jesuit Order, gives us our mainstream news.

In numerology, 101 represents 11
Agalarov is 1 month, 10 days after his birthday:

47 degrees on the Masonic compass:

It’s 211 days after the establishment date of Freemasonry

His first name, Emin, sums to 41 like today’s Standard numerology:

Agalarov has Reduced birth numerology of 32

Today is a span of exactly 32 weeks (or 7 weeks, 9 days) since Russia’s Independence Day: 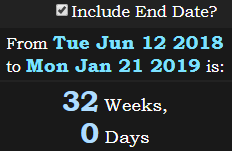 The Society of Jesus

Today is the 21st day of the year:

Today is 3 months, 25 days after the Jesuit Order’s anniversary:

And 325 days before Agalarov’s birthday:

The Jesuit Order operates through the Scottish Rite of Freemasonry at its high levels.

Emin Agalarov is the son of Aras Agalarov, whose initials are A.A., or 1-1. He’s 74 days after his birthday:

Emin could not reach a deal with Congress and Robert Mueller, who was born in ’44 and is currently 74 years old.

The 74th Prime number is 373, which CNN attributed in its headline: