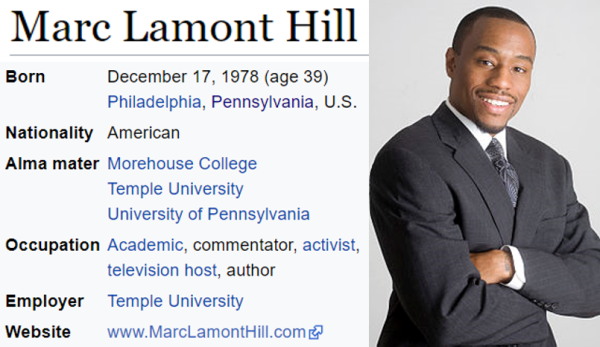 Marc Lamont Hill is out at CNN after making comments that were anti-Israeli. Of course, he’s an actor, and he’s just playing his role, which is to help build a culture that discredits people based on their beliefs, political stance, and past statements. In fact, you’d think he was a professional Antisemite judging by how Wikipedia now describes him:

Read the article linked in the headline up top and see what he really said to get himself fired. The Orwellian thought police are well on their way.

Should we be surprised that Marc Lamont Hill has the same gematria as Antisemitism?

The fake Jews who run our mainstream media really hate Jesus, and continue to mock and sacrifice him through symbolism and numerology in the news. This seems to be the case here as well:

This could be a coincidence, right? Check out Jesus Christ in the Reverse alphabetic order:

Hill was compared to Louis Farrakhan for his remarks.

His comments were made on Wednesday, a date with Full numerology of 77

Construction on that building began on September 14th, 1948. Today is 76 days after that date:

The building has 39 floors and is located in New York, the Empire state:

He’s 19 days before his next birthday:

Today is 314 days before October 9th. It’s also been 30 years, 14 days since the State of Palestine declared its independence:

This means the last October 9th was 51 days ago:

Today has a Life Lesson number of 51

The UN building is 510 feet tall

Marc Hill is a professor at Temple University.