Trump’s campaign was largely centered around building a border wall. Today marks the most pivotal day in his Presidency regarding immigration, as a caravan of migrants has arrived, causing the military to close the border crossing

Today is Trump’s 166th day since his birthday:

Trump is connected to California in gematria:

It’s the date that leaves 35 days in the year

The United States Border Patrol was established on May 28th of 1924, making this its 95th year in operation. Today is the 183rd day since May 28th:

In Reduction, order out of chaos, one of Freemasonry’s primary mottos, sums to 75

Today’s date has Full numerology of 75

Today also has Tiny numerology of 19

Without the end date included, today is 165 days after Trump’s birthday:

Trump was born on the 165th day of the year:

These secret societies rule through ritual and symbolism

Today is a span of 22 months, 7 days since Trump took office: 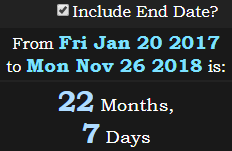 The rituals are Masonic, which sums to 223