The crash occurred on Thanksgiving

The headline also sums to 861
It also matches the gematria of the victims:

Notice the 740 in the Reverse order. Today has Full numerology of 74

The father in the story is named Anthony James Dean

Today has Standard numerology of 54

James Dean sums to 54, as does the name of Anthony Dean’s wife, Chelsi Kay Dean

As of today, the Air Force is 2 months, 7 days into its 72nd year of operations as an independent service: 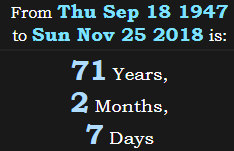 This crash occurred on Thanksgiving Day

The only person from the Air Force who was quoted  was Maj. Eric Inkenbradt

In Reverse, Thanksgiving Day sums to 234

Chelsi Kay Dean was the wife of the Air Force member:

In Ordinal, Thanksgiving sums to 141, ideal for a crash involving an Air Force family

The crash happened in Montana. On Thanksgiving Day, their Governor, Steve Bullock, was 141 days before his birthday:

The man was assigned to the 69th Maintenance Squadron:

Their daughters were 5 and 1 years old:

It was 50 weeks, 1 day before Montana’s date of admission to the Union:

In the alphabetic order, Masonry sums to 105

Huntley, where the Dean family died, is right outside of Billings

The phrase Thanksgiving SUV crash sums to 117 in 2 of the 3 primary Reduction methods:

The only person from the Air Force who was quoted  was Maj. Eric Inkenbradt

117 is the gematria of Thirteen, the primary ritual / hoax code:

Thirteen has double gematria of 45

Huntley sits on the 45th parallel: