This headline sums to 314 in Reduction

3.14 are the first three digits of Pi, which is used to resolve the mathematics of the circle

In my original post on this story, I pointed out how the name Watts sums to 83, fitting for a story about murder from Colorado

The murders occurred on August 13th, but did not hit mainstream media until August 16th. Chris Watts plead guilty on the 6th, which was 83 days later:

In the alphabetic order, murder sums to 79, matching the gematria of Frederick, where the murders occurred.

I also pointed out the gematria of Frederick, Colorado in that post.

The plea came a span of 14 weeks, 0 days after the anniversary of Colorado’s admission to the Union: 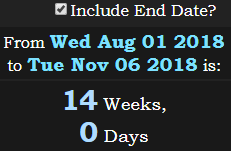 The date had Reduced numerology of 19

Governor Hickenlooper had been in office for exactly 408 weeks: