The match was for the Universal Title

It was on the date leaving 59 days in the year:

Brock won the match. He’s 2-for-2 in Saudi Arabia

It wound up being won by surprise entrant Shane McMahon, who was 10 weeks, 4 days before his next birthday:

Shane was supposedly diagnosed with acute diverticulitis earlier this year.

March 14th was 233 days before the World Cup Tournament

There’s more to this as well. Remember when Shane McMahon was in a helicopter crash?

Consider that when he won the World Cup, Shane McMahon was in his 292nd day of his age: 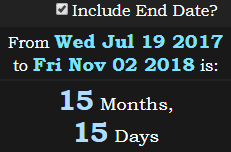