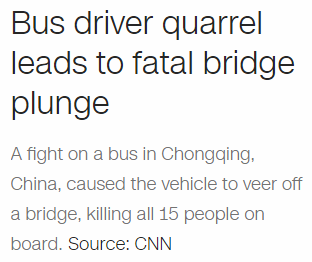 The date had 22 & 49 numerology, ideal for a crash started by a fight

Both Chongqing and Chongqing, China have 49 in their Reverse gematria:

The bus crash into the Yangtze River occurred on the date leaving 64 days in the year:

Both bus crash and Yangtze sum to 91

…that caused the bus driver to drive off the bridge