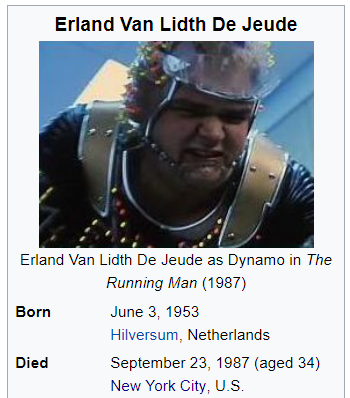 In Ordinal, blood sacrifice sums to 121

He died exactly 1 month, 21 days before the film was released:

This also converts to a span of 7 weeks, 3 days:

In both Reduction methods, Dynamo, his character in the film, sums  to 27

He was born on a date with 27 numerology

His birthday also had full numerology of 81

His date of birth in Hilversum, Holland was June 3rd, written 6/03

The date also had Standard numerology of 62

It’s the date that leaves 211 days in the year

This phrase sums to 911 in Satanic gematria

The Netherlands is also called Holland
The date he died, September 23rd, is written internationally as 23/9

Measuring to his next birthday gives us 254 days:

De Jeude is said to have weighed 340 pounds:

He wound up dying at age 34

The paragraph above says he was 198 centimeters tall.

When The Running Man was released, it was 163 days after his birthday: