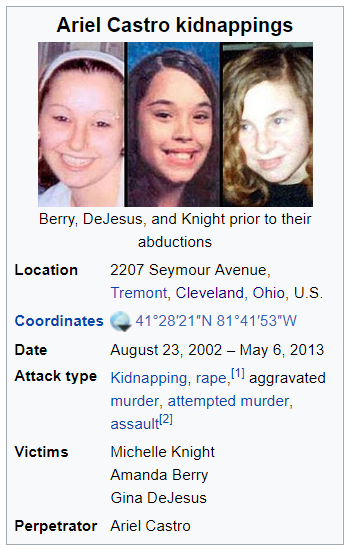 The three girls were held in captivity after being kidnapped

This ordeal ended when one of the girls was able to get free and call police.
The date was May 6th, 2013, a date with 44 numerology:

The name Ariel Castro has matching gematria with kidnapper

227 is a significant number to the circle and undoubtedly, the origin of the language.

The location of this incident was a neighborhood called Tremont, which has a perfect match with Masonry

The highest degree of Scottish Rite Masonry is the 33rd

33 is a number frequently-stamped into fake news and false flag stories. Not only does Tremont sum to 33, but so does the city it’s in:

The first kidnapping occurred on a date with 33 numerology:

The compass on the Masonic emblem is set to 47 degrees

Cleveland is in Ohio

Georgina DeJesus also goes by “Gina” DeJesus. When this is accounted for, their names have a value matching that of their captor:

The 76th Prime number is 383
The girls were rescued on the same day the Mayor of Cleveland, Frank G. Jackson, had been in office for exactly 383 weeks:

The Governor of Ohio, meanwhile, was (and still is) John Kasich
He had been in office for exactly 121 weeks:

Castro committed suicide a span of 121 days after he was arrested on May 6th:

In Jewish gematria, Freemasonry sums to 787

Rather suspiciously, this matches the names of the victims:

Also suspiciously, the names of the victims match the address of the house in which they lived.