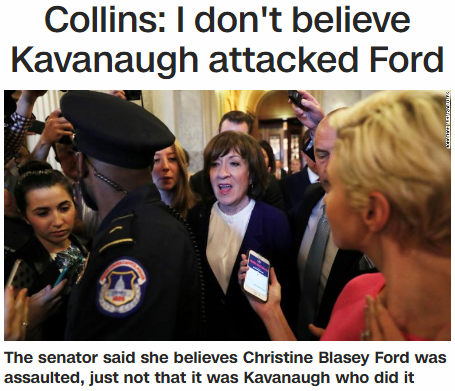 This weekend, the Senate approved Trump’s nomination of Supreme Court Justice Brett Kavanaugh. The vote went 51-49, 50-48. The Republican senator who is being credited with registering the “swing” vote is Susan Collins.

As I’ve been saying, these stories are constructed in a fashion that intentionally causes public division. The statement that Collins believes Christine Blasey Ford was assaulted, just not by the person she thinks, is one that is sure to enrage those who are opposed to the nomination.

So why is Susan Collins the one at the center of this controversy, and not some other Republican senator? Naturally, I believe the answer lies in the numbers.

Collins’ birthday is December 7th, meaning she was 303 days after her birthday on the date of the final confirmation vote:

As I detailed in this post, the numbers of solar eclipses are spammed into Kavanaugh’s name. So it’s fitting that he was born 67 days after Susan Collins’ birthday:

Susan Collins’ full name sums to 2027, like the Hebrew gematria of total eclipse

As documented in this post, it’s the numbers of the Moon that are coded into stories involving women. So I find it pretty interesting how many days separate the births of Brett Kavanaugh and Susan Collins: