The name Nurmagomedov has matching gematria with 666

His first name is also connected to 666, which shares gematria with the number 33

The circle is the mark of the Beast

Remember when McGregor fought the undefeated Floyd Mayweather last year, when he picked up his 50th win?

The circle is the 15th letter of the alphabet

The mathematics of the circle are resolved with Pi

There are a span of 69 days between the two fighters’ birthdays:

In Hebrew, his full name sums to 143, matching the Hebrew value of circle

There are 360 degrees in a circle. Khabib is currently 360 months old 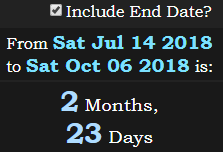 Conor, who was arrested after UFC 223, the event at which Nurmagomedov won the Lightweight Championship, is a span of 2 months, 23 days after his birthday and could go to 22-3 with a win.

It’s been exactly 26 weeks since Khabib won the Lightweight Championship. A loss tonight would give Khabib a record of 26-1

The United States of America is coded out like a giant circle with its 50 states.

Today is a great date for a Pi ritual like this. The date is October 6th, written 10/6

The date has both 16 and 25 numerology, syncing up with the gematria of Pi

To further support my prediction that Khabib will lose, take a look at how old he will be:

This is the Hebrew gematria of…

The one with “Jesus” numbers does not usually come out on top. Particularly when the opponent, whose name sums to 223, is looking to go 22-3 a span of 2 months, 23 days after his birthday.

Worth pointing out that Nurmagomedov’s birthday is 9/20, and was was 29 years, 200 days old (end date) when he won the title.

That was the 97th day of the year:

Shooting in Florence, SC a Tribute to Presidential Alert
The Shooting Death of Tamir Rice (2014)