Starter Jhoulys Chacin got the nod for the Brewers in their tiebreaker against the Chicago Cubs, which was each teams’ 163rd game of the season.

38 is the Hebrew gematria of Moon. As I’ve been documenting all year, the Brewers are the Moon team of the Major Leagues. This was further supported by Christian Yelich’s two cycles he hit against the Reds.

On the date of this game, Chacin was 380 lunar months old. He was also 38 weeks after his birthday:

In English, The Moon sums to 99 in the Reverse order:

He was also a span 99 days before his next birthday:

The starting pitcher for the Cubs, Jose Quintana, was born 1 year, 17 days after Chacin:

Chacin was born on a date with 34 numerology:

This number is found in both his first and last names, which are similar to the word Metonic

The last time Chicago played Wisconsin for a championship was January of 2011, when the Packers played the Bears in the NFC Championship Game. Today’s tiebreaker was played 2808 days, or 8 months, 8 days into the 8th year since that game: 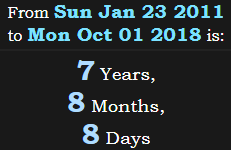 Chacin was born in the year ’88
The number 88 has been significant historically for the Cubs.

Recall how the Marlins scored 8 runs in the 8th inning of Game 6 in Wrigley’s 88th season to turn the tables on the Cubs in 2003. 88 MPH the speed at which they travel through time in Back to the Future, in which the Cubs are shown winning the World Series…etc.

888 is the Jewish gematria of pi, three point one four

On the date of the game, Cubs’ pitcher Jose Quintana was 29 years, 250 days old: