Big news coming from Boeing today, a date with 52 numerology:

Although this plane did not crash, it will no longer be in use. This is a number commonly-coded around such events.

In Reduction, Boeing sums to 34

Today has double numerology of 34

The 34th Prime number is 139, a number found in the gematria of both Boeing Company and Boeing 777

This number is also attributed in the headline:

Boeing is 72 days after its anniversary as of today, a date with 72 additive and multiplicative numerology: 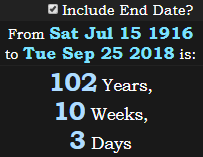 It’s been 110 days since the anniversary of the first commercial Boeing 777 flight:

Today is the 25th day of September. It also has 25 numerology:

The 25th Prime number is 97
Today is the date leaving 97 days in the year:

In the Reverse order, twenty-fifth of September sums to 314, the first three digits of pi. 777 is the first number that sums to 314 when spelled out.

The date also had double numerology of 29:

The Boeing Company was founded in Seattle, Washington