As I have been documenting on this Blog at great length, false flag operations are aligned with the dates local politicians took office in order to display certain numbers. The Mayor of Bakersfield, where these shootings occurred, is Karen Goh. She took office on January 3rd last year, meaning she had been in office for exactly 617 days:

617 is the 113th Prime number. This is the media’s favorite number of deception:

The shooting happened last night, but it’s making headlines this morning, September 13th. Today’s date, written internationally as 13/9, is significant to Freemasonry, who coordinates these false flag rituals by the numbers at the local and federal levels.

In the Reverse order, Freemasonry sums to 158
The shooting fell 158 days after Governor Jerry Brown‘s birthday

Notice how Brown’s birthday was April 7th, written 4/7. The Freemasonic emblem has a square and compass. The compass is set to 47 degrees and has the “Polestar” = 47 (RR) at its top. It’s the 47th Problem of Euclid that establishes the rules of “Foundation” = 47 (R)

So with all that being said, it’s fitting this shooting took place in Bakersfield

The 47th Prime number is 211
On today’s date, Bakersfield Mayor Karen Goh has been in office for a span of 20 months, 11 days: 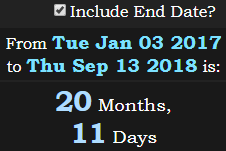 The day before the shooting, Bakersfield turned 1448 months old:

Additionally, the headline is coded with masonic numbers as well.

Today has a life lesson number of 33

It was 3 months, 30 days before the date Bakersfield was incorporated:

It has full numerology of 60

We also have alternate numerology of 51, syncing up with the location of the shooting:

And it’s the date that leaves 109 days in the year: