Jeff Bezos, founder of Amazon, is currently 235 days after his birthday:

235 is the Reverse gematria of Pi, three point one four

In Ordinal, three point one four sums to 224, the same as one trillion dollars

After hundreds of years of operation for the American economy, no company surpassed $1 trillion in value until Apple Inc did it just last month. Now, a second company has done it barely one month later.

The news about Apple broke on August 2nd. Measuring from that date, to the date of this news, is exactly 33 days:

I revealed how Apple’s announcement was a tribute to the Beast and its number, 666

Today is the date that leaves 118 days in the year

Including the end date, Amazon is 290 months old: 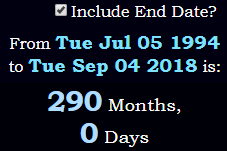