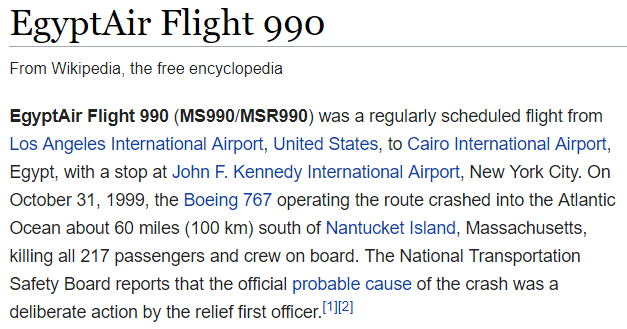 The event considered to be the second-deadliest terror attack in U.S. history behind the attacks on September 11th, 2001, is the crash of EgyptAir Flight 990

Interesting that the crash of Flight 990 happened in the year ’99. But 990 has always been an interesting number to me for a different reason, because of how it relates to the Ordinal & Reduction gematria of the word kill

The plane took off from JFK Airport. JFK was the 44th term President.
The 44th Triangular number is 990

The number 44 has a special connection to 144

In Reduction, the word kill sums to 17

In Jewish gematria, kill sums to 59
The date of the crash had 59 numerology 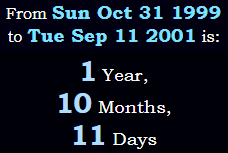 It was 251 days after Egypt’s national holiday
251 is the 54th prime number, matching the name of the perpetrator

The World Trade Center was built in ’68, the same year 9-1-1 became the emergency dialing code, and the same year President Bush Jr. graduated from Yale. Don’t forget, 2001: A Space Odyssey was also released that year.

The crash was 220 days before EgyptAir’s 68th anniversary

It was also 2 months, 20 days after the most recent total solar eclipse, which nearly crossed London, England, the original home of modern Freemasonry:

The plane is said to have crashed off of Nantucket Island due to the actions of the first relief officer, Gameel Al-Batouti

The date had full numerology of 123

It was 147 days after the anniversary of EgyptAir’s founding date: