Our news story of the day that makes no sense – there was a plane crash in Seattle, WA, after a mechanic (who we were later told is a ground service agent)for Horizon Air at Sea-Tac Airport stole a Q-400 and took off, only to crash the stolen plane several miles away, dying in the process.

Friday was a great date for this story. It had full numerology of 56

As usual, this masonic propaganda event was coordinated in relation to the dates local political officials took office. For starters, the date August 10th is written 8/10. The day before the crash, the Governor of Washington, Jay Inslee, turned 810 months old:

Measuring instead from the date he took office, we find it was exactly 2032 days – perfect for an incident to occur at Seattle-Tacoma Airport

It’s also 29 weeks after his fifth anniversary in office. The date of the crash also had numerology of 29

The plane thief was 29 years old, matching the gematria of Ketron, the Island on which he crashed:

Horizon Air’s CEO, who was on the air to announce the incident, has 290 gematria: 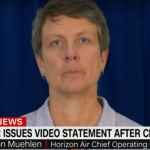 In the Kabbalah, her name sums to 255, matching the number of days the Mayor of Seattle, Jenny Durkan, has been in office:

The plane crashed near Puget Sound on Ketron Island

Washington is the 42nd state

Today, the date this story makes headline news, leaves 142 days in the year:

Von Muehlen’s and Durkan’s names have even more alignments to the calendar. Also consider her Jewish gematria:

August 10th, the date of the crash, is the date leaving 143 days on the calendar:

Her name has more masonic numbers:

The date this story made headline news is the 223rd day of the year:

Yesterday’s date, August 10th, was 8 months, 30 days after the anniversary of the State of Washington’s admission to the Union:

The plane crashed on Ketron Island

The crash was 182 days after Governor Inslee’s birthday: