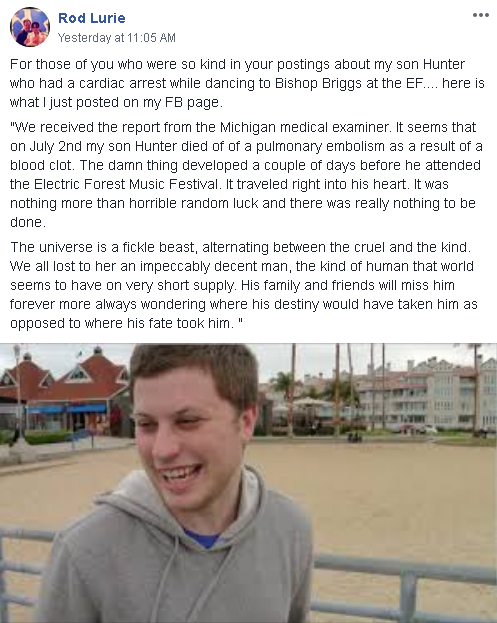 Last month, I made this post about the death of Hunter Lurie, son of director and screenwriter Rod Lurie, at the Electric Forest music festival.

This week, we received an update on the cause of his death. Allow me to share the Facebook post of Rod Lurie, who has been in contact with the EF community since the death of his son.

This should serve as a reminder that not every single person in the industry is in the “cabal.” As I said in my initial post, I can’t honestly suggest Hunter was murdered, based on the circumstances surrounding his death. If you haven’t yet, please, read my post on why I got heavily into numerology and became known to you as the Gematrinator. There is something well beyond our five senses that is causing people to die in this world. Whatever Shaun was a victim of, whatever my cousin was a victim of, and perhaps whatever Hunter Lurie was a victim of, appears to be a harsh consequence of the reality we live in.

I don’t mean to suggest people are not being murdered by this code. I absolutely believe that’s happening. And it’s possible that’s what this case is the result of. But there is 100%, absolutely positively something operating through a code of symbols and numbers outside of our perception. I also believe it’s possible this force that’s murdering people could be the result of ritual magic practiced by the darkest of the dark occult. But that’s a theory for another time.

First of all, let’s take into consideration the cause of death, a pulmonary embolism

Even before I heard about the death of Hunter Lurie, I made this post detailing how the festival is likely a masonic operation

In the post, Rod mentions he initially had cardiac arrest while watching an act named Bishop Briggs

Look at these numbers…

And finally, the infamous 67

Perhaps most significant is the Jewish gematria of pulmonary embolism

1117 has a unique connection to 187, which is the only number to have the same prime relationship as its prime factorization

187 is also known as the homicide code

The word sacrifice on its own sums to 46

It was a blood clot that led to the heart attack

So ultimately, what do I think? Whether or not it matters what I think is up to you. But think about it…if someone was really planning to kill him, how did they know he was planning to go see Bishop Briggs? There’s 5 other stages at the festival. Sure, some other acts may have similar numbers, but considering all that’s been shared about the organic side of the Matrix, I have to tap out and believe Hunter’s death was just part of this organic swirl of numbers we’re all living in.

My eldest brother’s name is Andy

When he was only 36 years old, he lost his wife to cancer

As he laid beside her during her final night, he glanced at the clock and saw it was nearing 3 am. As he has described to me, in the moment, he briefly wondered if 3:12 would be her final breath. She was born on March 12th, written 3/12. On cue, that’s when he believes she passed. It’s an awfully sad story I find myself fighting tears to type, but one that’s relevant to what I’m showing and one I hope people take seriously.

Ultimately, I just want to know the Truth about what’s happening in this world. A part of me wonders if it’s even attainable. The only True thing I’ve ever felt is the spirit of Jesus Christ.