Last night, the Dodgers scored the most runs they’ve ever scored in a home game at Dodger Stadium. They beat the Brewers 21-5

It was an interesting date for the Dodgers to score 21 runs. This was the date’s life lesson number:

As I’ve documented at great length, the Brewers are the “Moon” team of the Major Leagues.

The winning pitcher for the Dodgers was Clayton Kershaw, whose name has matching gematria with The Moon

This 283 was attributed in the headline:

When the game ended, it was the 215th day of the year on the east coast. The score 21-5 is especially significant to Clayton Kershaw. Back in 2014, he signed a $215 million dollar contract extension:

The extended gematria of Kershaw matches Number of the Beast in Jewish:

In Ordinal, Number of the Beast sums to 174, which matches the Jewish value of $215 million

This number was also attributed in the headline:

Yesterday, I made this post regarding Apple Inc reaching $1 trillion in value. I explained how it was part of a “Revelation” riddle.

The circle is the mark of the Beast. “Apple” and “Circle” both sum to 50 in Ordinal, and Apple’s headquarters is a giant circular building. The 50th prime number is 229 and Apple was exactly 2209 weeks old.

The 229th verse of Revelation reveals the number of the Beast as 666. In gematria, 666 and 33 are closely-related. 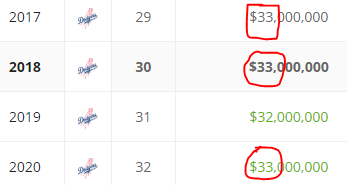 Clayton Edward Kershaw, his full name, even has matching gematria with Apple in multiple methods:

The game was played in Los Angeles the same day Apple reached one trillion dollars in value.

Back in April, Apple Inc turned 42 years old. In Revelation, the Beast rules for 42 months. The 42nd prime number is 181

Apple Reaches $1 Trillion in Value
Eclipse Symbolism in the Media