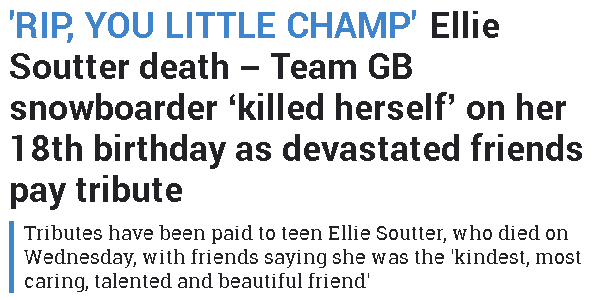 It’s being said that snowboarder Ellie Soutter committed suicide on her 18th birthday. Interesting way to celebrate adulthood. As usual, the most suspicious things get passed off as normal in the media.

The date of her death had full numerology of 70, matching the Ordinal gematria of the word suicide

Suicide has gematria of 43 in Single Reduction and 430 in English Extended, matching the date’s life lesson number and the name Ellie

This number is attributed in the headline:

Ellie’s birthday had a life lesson number of 34

Ellie Soutter sums to 73, just like the word eighteen, the age at which she died. This is a number I talk about all the time in relation to sacrifice. Think about how just yesterday, Mark Zuckerberg was 73 days after his birthday when Facebook took a huge tank in the stock market.

The headline says her friends called her the “kindest, most caring, talented and beautiful friend”

38 is another significant number in killing and death rituals:

Both her birth and death dates have numerology of 52

“kindest, most caring, talented and beautiful friend” = 347 (All Exceptions)