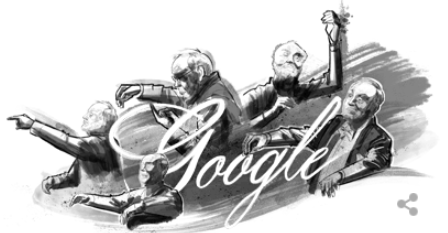 Kurt Masur is the feature of today’s Google Doodle. This must mean he was sacrificed by the crucifixion code. In the Gospels, Jesus was crucified under  a solar eclipse.

The date he died had a life lesson number of 39

Measuring from the date of Kurt Masur’s death to the date of the 2017 Great American total solar eclipse gives us exactly 20 months, 2 days:

202 is also the gematria of ritual human sacrifice in the Jewish (Latin) order:

Jesus was crucified at age 33 under a solar eclipse

Kurt Masur passed away a span of 30 weeks, 3 days before his upcoming 89th birthday:

He also died 154 days after his 88th birthday in Greenwich, Connecticut:

In that same Satanic cipher, ritual human sacrifice sums to 911
In English gematria, Conductor Kurt Masur has a similar value:

If you were to flip each digit in 1911 upside-down, you get 1611. When he died, Kurt Masur was exactly 1061 months, 1 day old. Note that the King James Bible, otherwise known as the Masonic Bible, was first printed in the year 1611

In standard Reduction, Jesus Christ sums to 43, as does killing in the Reverse method:

Check out the quote Encyclopedia Masonia (aka Wikipedia) uses to describe him:

110 is the Ordinal Hebrew gematria of Jesus the Messiah

He died on a date with 48 numerology:

Masur was born on the 199th day of the year

199 is the 46th prime number. He died from Parkinson’s on a date with 46 numerology: