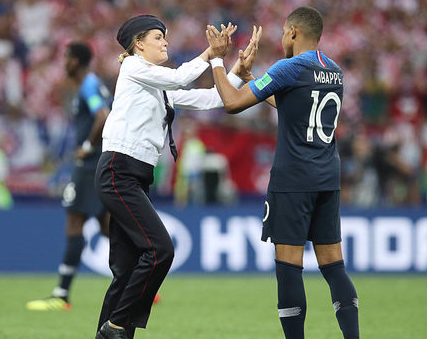 Think the group of people who ran onto the field during the World Cup final was random? Ha! You’ve come to the wrong Blog for that theory.

Think about it – if a group of people run onto the field in the middle of the biggest game of your life, how would you react? Would you give a double high-five to any of them? Of course you fucking wouldn’t! Women or not, you’d likely be doing what you can to get away from them.

This didn’t stop French forward Kylian Mbappe from enjoying the moment, as seen in the photo above.

The band Pussy Riot, a punk rock group of feminist activists, claimed responsibility for this delay on the field.

It occurred during the 52nd minute of play.

But in Jewish gematria, feminism sums to 219

In this game, the World Cup went to France

France beat Croatia in the Final

In the alphabetic order, the number 19 sums to 86

219 days after the game on 2/19/2019, the Moon will once again be passing over the star Regulus, as it was doing during the World Cup final.

On the date of the game, Kylian Mbappe, who gave the high-five to a woman on the field, was exactly 1021 weeks old.