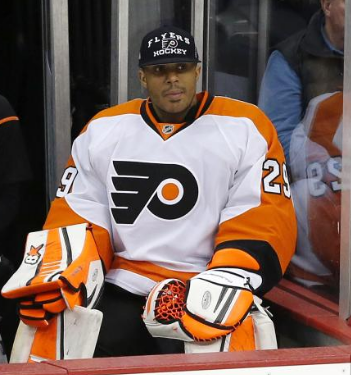 Former NHL goaltender Ray Emery has died at the age of 35 “while swimming”. They haven’t specifically told us that he drowned, but one would assume that’s the case.

Emery played for several NHL teams, but I will be focusing only on the team that drafted him, and the team he led to their first Stanley Cup Finals in 80 years, the Ottawa Senators. “Ottawa” = 80 (O)

Once again, this death appears to be a riddle related to the “Jesus Crucifixion code.” In the Bible, Jesus, who was more likely black than white, was crucified under a solar eclipse at age 33. Today, the date Emery died, has a life lesson number of 33

The team that drafted Emery, the Ottawa Senators, have matching gematria with the Society of Jesus

Emery was affectionately called Sugar Ray by his teammates. He was even born on a date with 47 numerology:

The word killing has gematria of 47 with Master Number exceptions:

Measuring from the 2017 Great American total solar eclipse to the death of Ray Emery gives us a span of exactly 47 weeks:

Ray Emery celebrated his final birthday a little over a month after that eclipse. It also fell on a date with 47 numerology:

If we measure from his 35th birthday to today, the date he died, we find it’s exactly 290 days:

In both English and Hebrew, the phrase used when referring to a specific eclipse sums to 290

Emery has passed away on a date with 60 numerology, a number frequently stamped into death rituals for black men.

In Reduction, the N-word sums to 42

Let’s see what Bleacher Report did with the headline…

Before looking at the gematria, check out the letter and word counts:

Today is a span of 329 days after the eclipse, which has a Hebrew gematria value of 156

In Reduction, the headline sums to 156

This is the gematria of 33, again, the age at which Jesus died

When you turn Full number calculation on so the 35 is added to the equation:

Ray Emery won a Stanley Cup in 2013
That same year, he and teammate Corey Crawford won the Jennings Trophy for beast goalie of the season.
He’s died 2 months, 13 days before his next birthday: