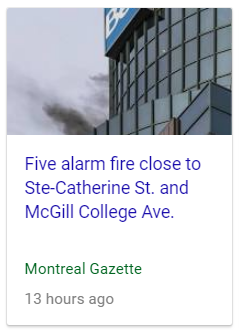 The same day the movie Skyscraper is released in the United States, we get a skyscraper fire just north of the border in Montreal.

This fire occurred on a date with 29 and 38 numerologies

The fire was at Bell Media Tower on July 13th

It was a date with a life lesson number of 31

The date also had 58 numerology:

It’s said that three people were hospitalized due to the blaze. Remember, the number 3 is a soft hoax code since it has the Double E, or a backwards 33

The mainstream’s favorite number of deception is 113

So it’s interesting that this Media Tower has gone up in flames in Montreal, Quebec, Canada

The mayor of Montreal is Valérie Plante. You have to appreciate the name “Plante”, in light of the fact that I keep documenting how these “elected” officials are planted into their roles by the global elites, not the voters.

Anyway, she shares a June 14th birthday with U.S. President Donald Trump. This is particularly interesting because last year on their birthday was the Grenfell Tower fire. This year on their birthday, two more blazes struck the United Kingdom. And don’t forget about the fire that actually occurred at Trump Tower on 4/7. “Trump” = 47 (RO), “President” = 47 (R)

Plante and Trump were both 29 days after their birthday on the date of the fire.