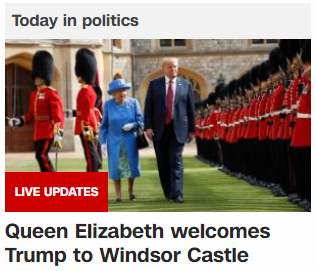 Trump is making his first visit to England since taking office in January of 2017. Why today? It’s a special date connecting Trump and the Queen.

On the date of the meeting, Queen Elizabeth is a span of 9 months, 9 days before her next birthday on April 21st:

The meeting is at Windsor Castle

Windsor, England has gematria of 159

So does Windsor, Berkshire, England

Trump won the 58th Presidential election while in the 58-story Trump Tower and was sworn in on a date with 58 numerology.

I’m not able to confirm the time at which Trump first shook hands with the Queen, but judging by CNN’s timestamp on the image right above the video, it may have occurred at 4:48

A couple more notes about the gematria of Windsor. To begin with, it’s in Berkshire.

I find it interesting that in the Reverse order, Windsor, Berkshire sums to 235, the number of synodic months in the Metonic cycle

Those 235 lunar phases sync up with 19 solar years. Add the numbers together and you get 254