This is so ridiculous. Supposedly, John Schnatter was participating in a role-play that addresses the issue of racial sensitivity. While role-playing, he used the N word…and now he’s resigning from the University of Louisville board of trustees.

Is it in great taste to throw that word around, even when role-playing? Probably not. But the fact that people can get offended by it in this context is completely ridiculous. Once again, the goal of the elite is to steer the mass’s minds towards self-censorship, and ultimately, the refusal to even think certain thoughts.

Anyway, let’s get into the numbers. To begin, July 11th is a nice date to get some propaganda about racism

This story is about the owner of Papa John’s, which is 9 months, 10 days after its anniversary:

Not including the end date, the above measurement is 9 months, 9 days 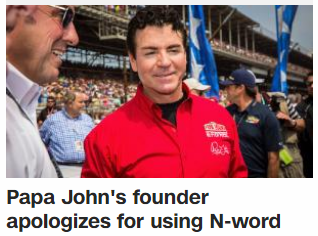 Today has full numerology of 56

John Schnatter, founder of Papa John’s, made his racist remarks at his current age of 56, one of several numbers they share in gematria.

Papa John’s opened in October of 1984, currently making it 33 years old. This piece of divisive propaganda comes out exactly 33 weeks after his birthday:

This means Schnatter, a.k.a. Papa John, is 135 days before his birthday:

Schnatter has that infamous 113 birth numerology:

Doesn’t the name Schnatter remind you of the name Shatner?