With Donald Trump visiting London on Friday, there has been a campaign in the UK to make Green Day’s “American Idiot” the number one song before he arrives.

The campaign is officially called Get American Idiot to No.1 for Trump’s UK Visit. In gematria, this Reduces to the same number as Trump’s full name in the Reverse order.

This article was published today, July 10th, written in most parts of the world as 7/10

With the single “American Idiot” having been released on August 31st, 2004, this means it’s been 13 years, 313 days. I commonly discuss how the number 13 is the ritual code employed by the media.

But what’s more interesting is how long it is until the anniversary of the single’s release – 1 month, 21 days, syncing up with the song’s Ordinal gematria:

This duration is also 7 weeks, 3 days:

It’s also a span of 73 days until the anniversary of the album “American Idiot” being released:

The 73rd prime number is 367, which is the Reverse gematria of the band and song/album name:

The lead singer of Green Day is Billie Joe Armstrong

On the date of today’s news, he’s a span of 20 weeks, 4 days after his birthday: 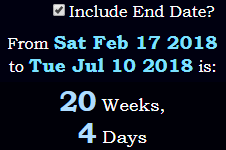 It’s been a span of 5 weeks, 2 days since Trump’s birthday. It’s 52 days before the anniversary of American Idiot’s release.