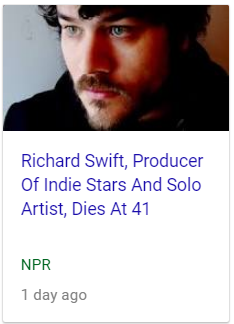 Although The Black Keys are marketed as a two-man band, singer-songwriter Richard Swift has traveled with the group and performed as their bassist at live shows since 2014. On July 3rd, he died at the age of 41

He died a span of exactly 41 weeks before drummer Patrick Carney‘s birthday.

Richard Swift died in Tacoma, Washington. I will also show how his death is numerically-linked to singer Dan Auerbach.

There are 66 books in the Bible. Before I went on vacation, I made a video on the death of XXXTentacion, explaining how his character was sacrificed as part of a Biblical riddle. The dark occult within the music industry seems to enjoy re-living the crucifixion of Jesus over and over and over again.

This riddle is undoubtedly in play here. Let’s begin with the Hebrew gematria of Jesus

It’s often stated that John 3:16 is the most famous verse in the Bible.

According to the Gospels, Jesus was crucified under a solar eclipse. Swift, who died exactly 316 days after the August 2017 Great American eclipse, was born on March 16th, the date written 3/16

The lead singer of The Black Keys is Dan Auerbach. Measuring from the death of Richard Swift to Auerbach’s next birthday gives us a span of 316 days

The date of that hospitalization was a span of 303 days after the eclipse:

See my slide on the significance of 17 in killing rituals. The 17th prime number is 59

The name Richard Swift has some gematric connections to Jesus as well:

Swift was born in the year ’77

He had full birth numerology of 115, a number strongly associated with killing

Including the end date, Swift was exactly 2,155 weeks old on the date he died.

Richard Swift was exactly 109 days after his birthday when he died. This syncs up with the gematria of Dan Auerbach’s full name:

As I mentioned, Craig Turner died on the same date:

He died on a date with 19 numerology:

109 in numerology reflects the number 19, which is something we commonly see coded into death and killing rituals.

Swift died on the date July 3rd, written here in the United States as 7/3

73 is the 21st prime number, lining up with the date numerology:

The name Swift alone gives us 73 in the primary Kabbalah cipher:

No doubt this death is numerically-linked to Dan Auerbach:

Internationally, the date is written 3/7. When combining his job and name, you get the number 370 in multiple English Kabbalah methods:

7/3 was also 7 weeks, 3 days after the anniversary of The Black Keys’ most recent album, Turn Blue.

This means he died just one day after the album turned 216 weeks old:

Measuring to the next Great American total solar eclipse from his death gives us exactly 2016 days:

This is the kind of thing I find difficult to mention, but I don’t know how I can leave it out.

Dan Auerbach’s full name has a gematric match with his band:

And as mentioned above, Swift was hospitalized on the 170th day of the year:

The Moon has 235 months in the Metonic cycle