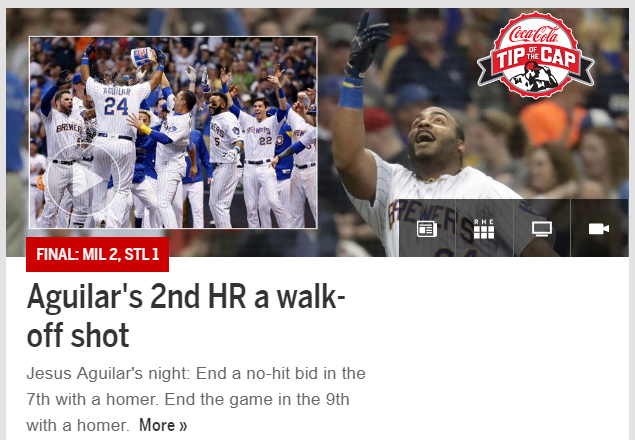 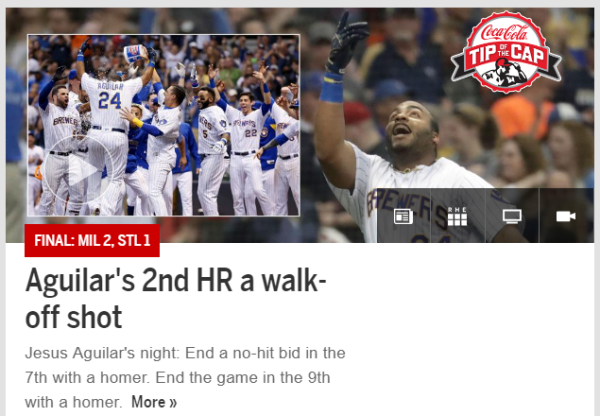 Last night, my Moon team, the Milwaukee Brewers, won a 2-1 game against the St. Louis Cardinals with a walk-off home run in the bottom of the 9th. “Moon” = 21 (R)

This was unique in that it was the first time since the expansion era began in the year ’61 that a player did both of the following:

His name is Jesus Aguilar

But there’s a LOT more to this numerical riddle, as I will show you.

The New Testament begins with the 42 generations to Jesus. The first King James Bibles were printed with 42 lines on each page.

The game finished with a score of 2-1

Jesus Aguilar wears #24, the inverse of 42
The Cardinals’ rookie whose no-hit bid Aguilar ended has gematria of 204

This 42 – 181 combination was cleverly-coded into MLB’s headline.

On the date of the game, Jesus Aguilar was a span of exactly 1460 weeks old:

This means he was just 1 week, 1 day before his birthday, which falls on a date with 74 numerology.

But here’s where it gets interesting.

Usually in these rituals, the “Jesus” character is sacrificed. In this case, however, he was the success story and literally won the game for the Brewers. The Jesus sacrifice actually happened earlier in the game.

That’s right – in the first inning, the starting center fielder for the Cardinals, Tommy Pham, got ejected for arguing balls and strikes from the dugout.

It was odd – first, Pham struck out looking. After the first pitch to the next batter was also called a strike, the umpire turned towards the dugout, pointed at Pham, and told him to hit the showers. He must have said something a little too loudly.

But what does this have to do with Jesus? In Hebrew, Jesus sums to 316

This is especially interesting because there’s also a span of 3 months, 16 days between the birthdays of Jesus Aguilar and opposing pitcher Jack Flaherty:

There are 844 days between the birthdays of Tommy Pham and Jesus Aguilar:

Pham was even born on March 8th, written 3/8
The 38th prime number is 163
There is a span of 16 weeks, 3 days between the birthdays of Jesus Aguilar and Tommy Pham:

Tommy Pham was 3 months, 14 days after his birthday:

In the Bible, Jesus was crucified under a solar eclipse. This is a big part of the ritual as well.

Coming into the game, Cardinals coach Mike Matheny had just lost his 463rd career game as manager of the team.

The first home run Aguilar hit that broke up the no-hitter was Jack Flaherty’s 101st pitch
The game was 10 months, 1 day after the 2017 Great American eclipse: