I usually ignore Trump stories, but this one was a little too big to pass up for the Podcast this weekend.

As we all know by now, Donald Trump became the first U.S. President since the end of the Korean War to meet a North Korean leader in person. In fact, he was the first to even speak to one over the phone.

The summit occurred on June 12th. 612 has been a remarkably significant number over the past several months.

You see, the Korean War ended on July 27th, 1953. This year’s second total lunar eclipse falls on July 27th, exactly 65 years after the end of the war.

Enneadecaeteris is the Greek word for the Metonic cycle, which is a period of 19 years. The summit fell exactly 19 weeks after the January 31st total lunar eclipse: 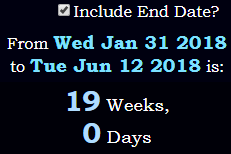 197 is the 45th prime number. 45 is the sum of the magic square of Saturn, and the Moon’s orbit is incredibly similar to that of Saturn’s. The July lunar eclipse falls on a date with a life lesson number of 45

Not only that…but Trump is President #45. And his meeting with Kim was 45 days before the lunar eclipse and anniversary of the end of the Korean War:

In Hebrew, the word for eclipse sums to 156. Kim Jong-un was a span of 156 days after his birthday on the date of the meeting:

While the year of Kim Jong-un’s birth is disputed, his birthday is not. He was born on January 8th, written 1/08

So this means he was also a span of 5 months, 5 days after his birthday: 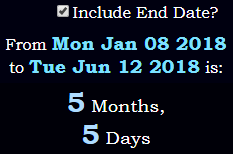 Kim Jong-un took office as Supreme Leader of North Korea on December 17th, 2011. That means the date of the summit was his 2370th day in office:

You could also say he was 177 days after his 6th anniversary of taking office. There are frequently 177 days between solar or lunar eclipses.

The summit was held at Capella Resort, Singapore

What about Donald Trump? On the date of the summit, he had been in office for 508 days:

Interesting this was also two days before his birthday. “Two” = 58 (O)

Why would a peace summit between America and North Korea take place in Singapore of all places? Consider that both Korean flags have a circle on them. The Moon is the largest observable circle in the sky, and in fact, the South Korean president is named Moon Jae-in.

The meeting was at the Capella resort in Singapore

Another look at the gematria of Capella Resort, Singapore, this time in Jewish gematria:

857 is a highly-significant number to the Moon, as it syncs up multiple lunar cycles. This is a number attributed in the gematria of North and South Korea

857 is the 148th prime number. The Moon also has a 33-year cycle syncing the 12-month lunar calendar with the solar calendar.

The Capella Resort is located on Sentosa Island, Singapore

The resort is located on the 103rd meridian.