In a series of posts I made a couple weeks ago, I revealed how the Milwaukee Brewers, my hometown baseball team, are the “Moon” team of the Major Leagues. While certainly not the only team with Moon numbers, I think you’d be hard-pressed to find a team more ensconced in this numerology.

So yesterday should have been an interesting day for the Brewers, and it was. Not only was it on Monday, the day of the week ruled by the Moon, but the date had very “Moon”-y numerology.

To celebrate the occasion, the Brewers opened up a series against the Arizona Diamondbacks at Chase Field 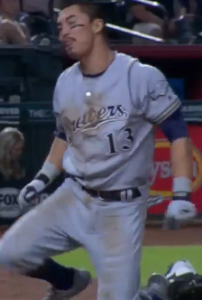 The man on the left there is Tyler Saladino. He just made his debut for the Brewers the day before this game. In Monday’s game against the Diamondbacks, he capped off the scoring with an inside-the-park home run in the ninth inning.

Inside-the-park home runs are pretty rare – only  handful of them occur per season. Notice how Saldino wears #13, which I commonly say has everything to do with the Moon, which begins with the 13th letter and completes 13 lunar phases every few years. So isn’t it interesting that this was Saladino’s 13th career home run.

His round-tripper made the score 7-2, which remained as the final.

In the alphabetic order, Chase Field sums to 72

Why is this interesting? Well the most significant date in history involving the Moon would be the date mankind supposedly landed on the Moon was 7/20. This just happens to be Tyler Saladino’s birthday…

He was drafted 218th by the White Sox

After Saladino scored, they showed a camera shot of the Diamondbacks’ pitcher responsible for allowing the runs. It just so happens he wears #57 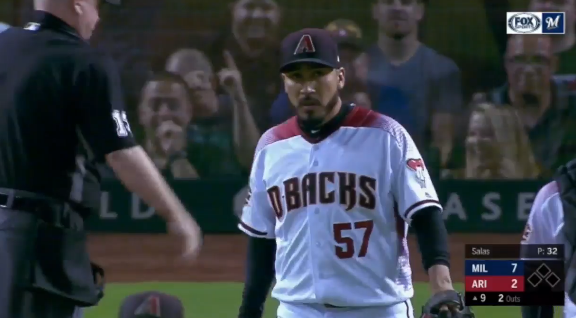 The Moon is ~2160 miles wide. The birthdays of Tyler Saladino and Fernando Salas, who wears #57 in the picture above, are separated by exactly 216 weeks, 0 days: