The Shield was a popular group that debuted in the WWE in 2012. The three-man team was immediately pushed into the Main Event. They were well-received for their badass look, their attitude, and their insistence on entering the arena through the crowd instead from the stage like the rest of the wrestlers.

The WWE is part of the same cabal as our professional sports leagues, and it too participates in numeric rituals. There are no real statistics on pro wrestling, aside from the number of title reigns and number of days a title was held, so there’s very little you can do outside of the standard date-to-date jargon once you’ve given them their stage name.

All that being said, it seems like WWE has treated the careers of the three men in The Shield with great reverence. Its three members are Roman Reigns, Seth Rollins, and Dean Ambrose.

In this post, I’ll focus on one key event involving The Shield. There was one day, back in 2016, when all three members of The Shield held the WWE World Heavyweight Championship in the same day. This occurred at a Pay-Per-View called Money in the Bank.

Roman Reigns lost the title clean to Seth Rollins in the Main Event. After the match, Dean Ambrose, who won the Money in the Bank briefcase earlier in the show, cashed it in and quickly pinned Rollins to win the championship, making all three of them WWE Champions within just a couple of minutes.

But here’s where it gets interesting. Pay attention to the date Money in the Bank that year was held:

Did anything else interesting happen that day? I guess you could say that. Earlier that day, actor Anton Yelchin was found dead in his own driveway, because in Hollywood, your own SUV can run you over just outside your home in the middle of the night, and nothing will be deemed suspicious about it.

But that date was also significant in the world of pro sports. LeBron James, nicknamed King James, brought the first-ever NBA Championship to Cleveland with a Game 7 win over the Golden State Warriors, who hilariously couldn’t score a single point in the final 5 minutes of the game, despite being winning 73 games that season with the best offense in NBA history.

This all happened on the same date the real King James, James VI and I of Scotland, would have turned 450 years old

In numerology, 450 becomes 45. This is a special number to the Bible, which has double gematria of 45 in Reduction. In fact, “The Shield” matches “Holy Bible” in all four base methods.

In the English Kabbalah, the names of the three men add up to 405

In Septenary, they sum to 119. The present-day Masonic Bible is actually just the King James Bible with introductory pages.

James VI was the King of Scotland from the time he was only one year old, meaning he had ruled for over 57 years at the time of his death:

The Shield’s signature sign of unity is a fist bump. 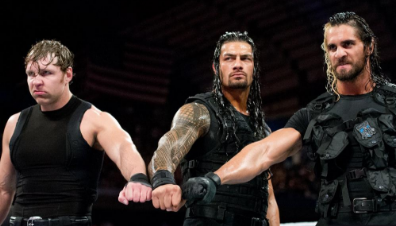 Think of this as being symbolic of a masonic handshake. These guys probably have no idea that’s what it is, but the truth lies in the numbers.

While not officially the leader, the prominent figurehead of The Shield is Roman Reigns, the man at the center of the picture. He’s got those R.R. initials. Modern Lodge-based Freemasonry was founded in 1717

On the date they debuted, Roman Reigns was exactly 10039 days old:

Measuring from the date of their debut to the date all three men held the WWE Championship in one night:

139 is the 34th prime number. The date of their debut had a life lesson number of 34

The numbers support the idea that Reigns is the leader. The Shield made their debut on November 18th, 2012. Since it was a leap year, this was the 323rd day of the year, matching Roman’s real name

This date had numerology of 61

This date also had 43 numerology, and left 43 days in the year:

So this is where it gets a little dark. The man who ended up with the title that night was Dean Ambrose. His real name is Jonathan Good.

In the alphabetic order, “Dean Ambrose” sums to 97, which is found in his full name with all exceptions

I’m afraid Dean Ambrose is being stamped with numbers in preparation for a future sacrifice ritual. I’m going to have to turn this into a different post to be completed this weekend.