When looking at mainstream media, the two key numbers to look for when determining whether or not the story is a hoax are 13 and 33.

The children allegedly died in a Honda Crosstour

Another good sign of a hoax is when the key elements of the story have direct matches. Here, we’re told two children died from heatstroke in a Crosstour

The deaths are said to have occurred last year, on May 26th, 2017. Measuring from that date, to the date of the sentencing:

In numerology, 190 becomes 19 with the zero removed.

For some reason, this story appears to be related to the Great American total solar eclipse of 2017. Although this is nothing new, it still leaves me scratching my head. This just seems to be what “they” do.

The date Randolph‘s kids died was May 26th, 2017. Measuring from that date to the eclipse: 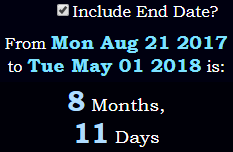 Heatstroke was used in another ritual I decoded that was related to the eclipse from earlier this year. See my work on the sudden death of rugby player Kato Ottio.

I’ve also been documenting the Ram / Mar hoax codes. Along with the Man and the Son, the ram / mar sequence is used with stunning frequency.

The woman in this story is named Cynthia Marie Randolph, and her children’s last name was Ramirez.

Not only do you get 137 when you add the two kids’ names together:

But we also find their names have the same values in English and Jewish gematria.

So who’s giving us this propaganda?