On Monday, the night after WrestleMania, WWE wrestler Paige announced her retirement. She’s only 25. She debuted 4 years ago – “coincidentally,” it was in the same city of New Orleans that she retired in tonight.

Apparently, this stems from some sort of neck injury. How strange is that? I focused on the career-threatening, and ultimately career-ending, neck injuries of Steve Austin and Daniel Bryan. And now we have a wrestler who debuted the night after Daniel Bryan’s WrestleMania 30 win retiring a day after the next WrestleMania hosted in that same Superdome. How strange.

I couldn’t help but think of how ironic the name “Paige” is, in light of her now having to turn the page in her life to find a new career. And her career is unique to begin with – she won the Divas Championship the night she made her debut.

Anyway, I found this interesting. Recall how Daniel Bryan shared a birthday with the Unabomber, May 22nd, the 142nd day of the year.

Her original ring name also has this value:

The Unabomber’s arrest came a span of exactly 263 months before the first Austin bombing. 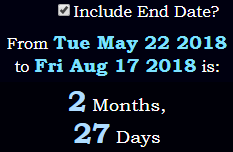