Yesterday, I made this post about a bus crash in Saskatchewan, Canada, that is now said to have killed 15 people.

While I’m sure there’s been many bus crashes, the one that sticks out to me the most is this one, which was reported right around the time I was really waking up to this numerology business. In that crash, 13 people were killed, and 31 were injured. Of course, 1331 is our number that represents a total solar eclipse.

So I thought I’d measure between the dates of these crashes and see if anything stuck out – it did immediately:

This crash in Saskatchewan happened on the 53rd parallel on 4/6, written internationally as 6/4. The 46th prime number is 199

It’s interesting that the worst school bus crash in U.S. history, which also occurred in California, had 53 people on board, with 28 students dying:

Measuring between those two bus crashes:

In regards to 1331 being related to a solar eclipse:

That bus crash from October 2016 was nearest to the city of Palm Springs, California:

487 is the 93rd prime number. The date of the crash was 9 months, 30 days before the Great American total solar eclipse: 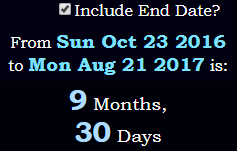