In this post, I will discuss the sinking of the RMS Titanic, a triple-prop ship which hit an iceberg on April 15th, 1912, sending it to the floor of the Atlantic Ocean 400 nautical miles from Newfoundland, Canada.

It sank on a date with full numerology of 50:

This post will also make frequent reference to The Wreck of the Titan, a book published in 1898, fourteen years before the Titanic sunk. In that story, a triple-prop ship called the Titan hits an iceberg on a night in April, and winds up sinking 400 nautical miles from Newfoundland, Canada.

Just a coincidence, right? Of course not.

The full name of the book was:

The 113th prime number is 617. Several bankers who were opposed to the idea of the Federal  Reserve Act died aboard the ship.

Measuring from the sinking to the Federal Reserve Act being signed the following year:

Construction began on the date written 3/31

The 71st prime number is 353. The ship sank exactly 353 days after the most recent total solar eclipse.

The film Titanic was released 85 years, 8 months, 5 days after the Titanic sunk. 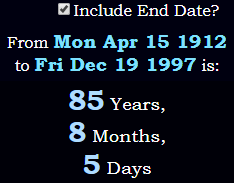 The ship sunk on the 41st parallel and the 49th meridian

The date had 41 numerology:

The Titanic sunk exactly 1307 days after it was ordered:

The youngest person to be aboard the Titanic when it sank was also the one who wound up outliving all the other survivors. She was known as Millvina Dean. She passed away 137 months after the movie “Titanic” was released.

Interesting that the Titanic was discovered 73 years after it sank.
“Titanic” = 73 (Jewish Ordinal)

Measuring from her date of birth to the sinking:

Her real name was:

The day the Titanic sunk left 260 days on the calendar:

The Titanic was 800 feet long and considered to be “unsinkable”

The Titanic actually hit an iceberg on the night of April 14th, just 20 minutes before midnight. That date is written 14/4 in most parts of the world.

In the book, the Titan is 244 meters long