Rapper Craig Mack died yesterday. It’s being reported he was 46, however, Wikipedia is currently displaying his year of birth as 1970 instead of 1971.

So why have all these outlets gone with 46?

We recently lost Cranberries singer Dolores O’Riordan at this age in January. That was right before the death of Fredo Santana, who I had never heard of, but I think my video about his death was my most-watched video on YouTube before my channel was deleted.

This is a biblical number. See how the 46th chapter of the Bible begins:

17 is another number heavily-coded into sacrifice rituals.

If he was really born in ’71, check out how hold he would have been at the time of his death:

Just one day after a double 17.

He was born exactly 71 weeks before Chris Mack: 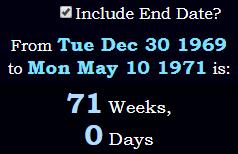 His final album was titled:

It came out on the 244th day of the year

Recall how soccer star Davide Astori dropped dead last week exactly 244 weeks after he scored the only international goal of his career.

The 44th prime number is 193. Craig Mack released one album since 1997 – it dropped just last year on September 1st. Measuring from that date to the date of his death:

The album was called:

On the date he died, it was exactly 317 weeks before the second Great American total solar eclipse

That same day, the the top story was the Austin, Texas package bombs

Regardless of what year he was born, measuring from his death to his next birthday:

With the end date included, it’s 60 days before his birthday

The masons are particularly fond of Saturn, which makes this interesting:

9.69 km/s was the speed of Saturn (before they changed it this past year)
Evidence of NFL Rigging in Giants’ Scores
Trump Tells Secretary of State Rex Tillerson – “You’re Fired”